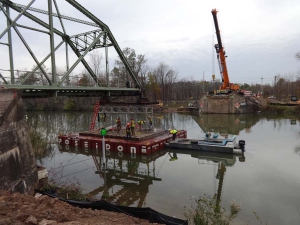 Creighton Manning designed the barge, scaffolding and rigging for Economy Paving to remove a truss bridge over the Erie Canal in Canandaigua yesterday.

Macedon, N.Y. – The Canandaigua Road Bridge in Macedon has been closed to traffic for the last five years.

On Wednesday, the community watched as DOT workers took down the bridge.

Work began around 7:30 a.m. to remove the one-lane bridge. Cranes set up rigging and welding crews started to fix one end of the bridge to a scaffold on a barge.

“Out with the old, in with the new,” laughed Len Davison, the engineer in charge of the project. “This is something that’s done too often, so we get a lot of onlookers to check it out and see how it goes.”

Ester Farabell brought her trusty binoculars to keep a close eye on the work.

“Oh yes, they come in handy,” Farabell said. “I can read their lips!”

The work was smooth, shifting the bridge from one bank to the other. It took the crews about 25 minutes to float the century-old bridge across the Erie Canal.

“[It’s] a big job, an interesting job,” Davison said. “A lot going on. This will be good when it’s open. It’ll be a main thoroughfare south and north in this area.”

Canandaigua Road connects Route 31-F to the north and Route 31 to the south.

For the last five years, drivers have had to find other ways to get into the village of Macedon.

The bridge will be replaced with a new two-lane steel bridge with a sidewalk.

“It’s going to save me a lot of time going to the VA in Canandaigua,” Walworth resident Hugh Jackman said. “So I’ve been looking forward to this for a long time.”

Patrick Mead of Chili was out hunting in Macedon, but took the time to check out the work.

“You know you gotta go around this big country block to get to where you’re going,” Mead said.

Now that the bridge is down, it will be dismantled, stored and reused as a pedestrian walkway in Rochester.